The Sinpar was originally French automobile manufactured from 1907 until 1914. The company built De Dion–engined voiturettes in Courbevoie; cars used either 4½ hp or 8 hp power units. An 8 hp four produced from 1912 until 1914 was identical with the 8 hp Demeester.

The name “Sinpar” was meant to suggest that the car was “without equal” (“sans pareil”).

The company seemed to have disappeared for good following the outbreak of the First World War, but more than three decades later Léon Demeester, who had established the business back in 1907, resurrected it. Sinpar now engaged in winch manufacture and heavy-duty transmission sub-assemblies for four- and six- wheel drive trucks. These specialist items were provided to a range of industrial companies in France until 1975 when Saviem took over the company’s activities.

In Autumn 1962 “Sinpar” launched an all-terrain light vehicle based on the Renault 4, and after Sinpar itself ceased its activities Renaultcreated a subsidiary of its own, based at Chassieu which produced the modified all-terrain Renault 4 based vehicles. The new business was still called “Sinpar”, but now “Sinpar” was an acronym which stood for “Société Industrielle de Production et d’Adaptations Rhodanienne”.

During the later 1960s the business increasingly focused on four-wheel drive conversions for various Renault models, notably the Renault Goélette (the vans mostly being destined for service with the French army) along with the Renault 4, Renault Rodéo, Renault 6 and the Renault 12. Although most of the cars were sold in France, useful volumes were also achieved in the more mountainous regions of Switzerland where, until the arrival in Europe of the Subaru, there was significant customer demand for reasonably priced four wheel drive cars which the larger auto-makers were disinclined to address. 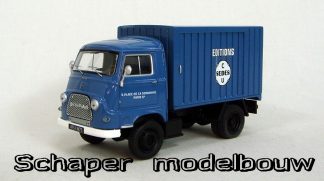