In the second half of the 1970s, the US Army procured 1,000 of the heavy-haul truck – together with the four-axle M747 semitrailer – for road transportation of Main battle tanks and other heavy loads.

A tank often carried by the Oshkosh M911 was the M47 Patton.

The Oshkosh M911 was also used with the US Army units stationed in Europe. 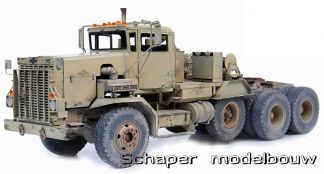