The Dodge Little Red Wagon is an exhibition drag racing truck first introduced in 1965 and was world’s fastest truck at the time and first wheelstanding truck.

Owned and driven by Bill “Maverick” Golden and based on the compact Dodge A100 pickup, the truck toured extensively throughout the United States and was frequently seen in television commercials for Dodge trucks.

Builders Jim Schaeffer and John Collier performed extensive modifications to the A100 in order to fit a 426 Hemi engine and TorqueFlite automatic transmission. Since the A100 was acabover design, Schaeffer and Collier opted to install the drivetrain in a roughly amidships configuration behind the rear of the cab, in the pickup bed, within a welded steel subframe.

Parts deemed unnecessary were removed from the body, among them the heater, dashboard, front bumper and all body sealer. The passenger doors were replaced with fiberglassunits. The Little Red Wagon’s first dragstrip run netted a mid-11 second quarter mile at 120 mph (193 km/h).

The vehicle was not originally intended to perform wheelstands; the slight rearward bias caused the nose to lift in the air for nearly the entire quarter-mile run.

Golden soon purchased the truck from Dodge for use as an exhibition racer. The Little Red Wagon debuted in the 1965 season opener at Lions Drag Strip in Wilmington, California in front of 10,000 fans and reporters from major newspapers and automotive publications.

The vehicle suffered three wrecks in 1969, 1971 and again in 1975. After the 1975 wreck, Golden converted a non-operable show truck and campaigned it for the next thirty years.

Golden entered the Guinness Book of World Records in 1977 with a 4230′ (1289m) wheelstand, approximately the length of three quarter-mile dragstrips.

It is also the subject of a 1/25 scale model kit from IMC and was later reissued by Lindberg Models. 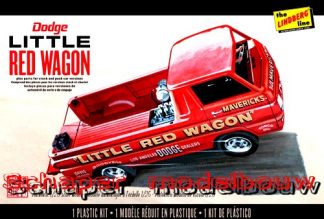